The high note. The bass line.
The words that send a shiver of recognition down your spine. A rush of dopamine. Thousands of hairs standing on end. An emotion recognized and released. Your mind knows what to react to. Your heart knows what connects. It has been said that music feeds the soul, so give it something good to feast on. Give it McGoozer…

With a vocal range that will astound you and lyrics that will remind you of a life well lived, McGoo sings both from the heart and for the heart. He isn’t just a remarkable musician: he is a storyteller, a performer, and an authentic human being who believes that music exists to be experienced and shared. 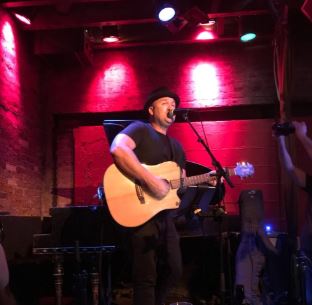 What you put into your ears does matter, so fill it with music that motivates, invigorates, and resonates. McGoozer makes positive music about universal experiences. They are personal, relatable, and beautiful, creating a soundtrack for your life that’s as compelling and complex as you are.

Whether you’re craving a sweet melody or a rock anthem you can sink your teeth into, McGoo and his crew have you covered.

In an industry with a lot of noise, listen to music that speaks to you. Your heart has a beat, but if it had a voice, it would sound like McGoozer.

Paul McGee, known widely as McGoo, embraced music from an early age. His siblings had a major impact on his love for music along with the influences that abound in his native Scotland. With his brother Brian being a founding member of Simple Minds and his other brother Owen (AKA Owen Paul) having a UK summer smash in 1986 with “You’re My Favourite Waste of Time”, it is no surprise that McGoo has spent his entire life immersed in the music industry and yet still feels like this is just the beginning.

His career in music began with “The Official Tribute to the Blues Brothers”, where he alternated between playing the parts of both Jake and Elwood Blues as he toured with this theater production. In the three years that he was engaged in this production, McGoo toured Europe twice, toured the UK for a full year and participated in a six-month long residency in London’s West End.

These years were extremely important in the fledging years of his own band, McGoozer, as they offered him widespread exposure as well as experiences with which he could base future songs upon. As his time touring with the “Blues Brothers” production slowed down, he focused on creating his own music and honing his craft into the melodic anthems that his name is becoming synonymous with.

Another early career highlight was recording and touring with Mike and the Mechanics. McGoo sang on their studio album “Rewired” and toured all round Europe as the opening act for Phil Collins on his world tour, performing to festivals and stadiums of over 70 thousand people at a time. “It was truly fantastic to get to work with, and get to know, such musical giants as Mike Rutherford and Paul Carrack”, notes McGoo.

McGoo’s manager, Steve Shippee of ShipWright Productions, discovered McGoo by accident – an accident they have since recognized was more destiny as their combined, complementary talents have created the perfect foundation from which McGoozer can launch.

“Paul McGee is a singer/songwriter with a vocal range that is reminiscent of Axl Rose and a tone/melody often described as that of a male Adele. He tells a story with his rock/pop styled music that elicits a feeling of positivity and personal connection. He can cover the likes of Aha, Ed Sheeran and Taylor Swift with his unique interpretation of their music, however his original tunes are his true works of art.” Steve Shippee, CEO of ShipWright Productions

McGoo’s passion continues to be funneled primarily through McGoozer where he is constantly inspired and feels some of his best music moments have been born. McGoo is also regularly sought after to collaborate with other artists as there is an increasing desire for his talents in all aspects of the music industry.