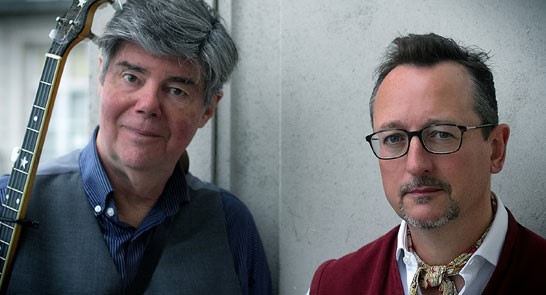 Human Cargo gives voice to past exiles – emigrants, slaves, transportees – to shed fresh light on today’s migrations. Through the accompanying Parallel Lives project, it includes – wherever it performs – local stories of migration and partnership with local refugee and migrant support groups.

In a remarkable evening of story and song, Crampton tells true tales of individuals forced into exile in the 18th and 19th centuries. He weaves these stories through a tapestry of traditional folksong from the time performed by Warner. As Crampton explains, ‘History usually tells of the rich, the famous and the lucky. But what of ordinary people? Folksong helps give them a voice.’

Crampton will also research and tell local stories at the event. ‘I hunt through original passenger lists from 18th and 19th century ships to find people who’ve migrated from that very town. In parallel, I talk of people who’ve come to live there in recent decades.’

Parallels with today are clear. Crampton says, ‘Mass migration is a defining dilemma for the world. Giving it an historic perspective can detoxify the debate. Adding local stories helps people find their own place in the story.’

This approach draws on Crampton’s recent success with his co-adaptation of Peter Bellamy’s folk ballads The Transports (‘Truly a transport of delight’, ***** The Guardian) With full houses and standing ovations in two tours across Britain, critics agreed Crampton’s re-imagining of The Transports helped lift Bellamy’s brilliant concept to new levels.

Formerly a leading speechwriter, and teacher of speechwriting at places like London’s Globe Theatre, Matthew Crampton is now known as a storyteller, author and folk singer (with a growing sideline in music hall).

Jeff Warner is one of America’s foremost interpreters of traditional music, well loved for connecting 21st century audiences with the everyday lives of people from past centuries. Born to one of America’s most eminent families of folksong collectors, Jeff grew up listening to the songs and stories of his father Frank Warner and the traditional singers his parents met during their collecting trips through rural America.

Through the Parallel Lives project, Crampton has formed links with 45 different refugee and migrant support groups. ‘There’s an incredible array of local initiatives across Britain – individuals who get together and say, we must help refugees who arrive in our town. Maurice Wren, chief executive of The Refugee Council, calls Parallel Lives “a wonderful concept, brilliantly realised.”