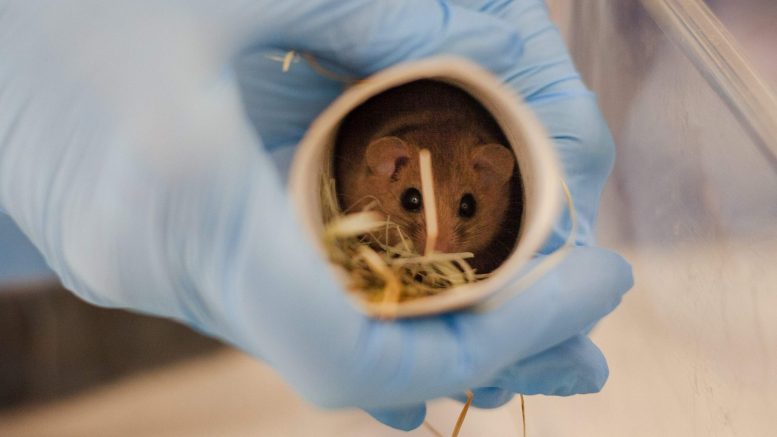 What’s the one item every self-respecting dormouse wants in their pied a terre? A cardboard tube from the middle of a toilet roll.

21 dormice have arrived at Paignton Zoo Environmental Park in Devon on their way to being released into the wild in Warwickshire in June as part of ongoing efforts to help save this endangered species. The cardboard tubes make ideal hiding places for the tiny mammals while they are in quarantine and waiting to have their health checks from the Zoo’s veterinary team.

Paignton Zoo vet nurse Kelly Elford explains. “We have the dormice in quarantine for some weeks prior to release. The toilet roll tubes are just the right size for the animals to sleep in and are easily disposed of when we clean out their tanks.

“We put in wood shavings, hay, leafy branches and a toilet roll tube. Some dormice pull hay into the tube and sleep there – some ignore them completely, but at least they have the option. This is a really useful – and very unusual – way to recycle old cardboard!”

The 11 males and 10 females were brought to Paignton Zoo from private breeders who are members of the Common Dormouse Captive Breeders Group. Those animals that pass their veterinary screening will be released into the wild in a reintroduction led by wildlife charity People’s Trust for Endangered Species (PTES), as part of Natural England’s Species Recovery Programme.

Vet nurse Kelly again: “They are kept in strict quarantine and cared for by keepers. We check them over, weigh them and worm them and then implant tiny microchip transponders under their skin so they can be individually identified in the future.” Each animal arrives with a studbook number which helps to identify them throughout their life.

They are in quarantine from the time they start the tests until they go for release. The aim is to make sure they are not carrying diseases that they might introduce into the wild. The animals will be paired up at the release site in June.

Treating very small animals brings its own complications. Kelly again: “When we anesthetise them we use a gas-mask made to go over the noses of bigger animals – but the dormice are so small we can fit the whole animal inside!” Most of the animals weigh between 18 and 30 grams – about as heavy as a handful of hazelnuts.

The Common Dormouse Captive Breeders Group supplies animals for the English Native Species Recovery Programme. Paignton Zoo holds and breeds hazel (common) dormice. CDCBG members move their animals on to Paignton Zoo and the Institute of Zoology at the Zoological Society of London, who share the burden of quarantine and of carrying out the vet checks before release.

Ian White, Dormouse & Training Officer at PTES said: “Since the first reintroduction took place in 1993, more than 900 dormice have been released across 12 English counties which is helping to create dormouse ‘strongholds’ in counties where they have sadly become extinct.

“Once released, the captive-bred dormice, and any future offspring, will be monitored to see how they’re faring. This, combined with ongoing sympathetic woodland management, should help ensure the successful establishment of this new population in a woodland which was once part of their former range. By coordinating annual releases, we hope to bring this charismatic species back from the brink.”

Hazel dormice (Latin name Muscardinus avellanarius) grow to a length of about 6.5 to 8.5cm (2 ½ – 3 ¼ in) and weigh just 18 to 25 grams. They live in wooded areas where they eat flower blossoms, grubs and occasionally birds’ eggs in spring and summer, and seeds, berries, fruit and nuts in autumn.

They spend half of their life asleep hibernating in nests throughout the winter. They are primarily arboreal so can climb well, using their tails to balance. As the name implies, hazel dormice love hazelnuts – in fact they are one of the creatures responsible for the discarded shells with characteristic bite holes.

The annual reintroductions are led by PTES, in conjunction with partners Natural England, Paignton Zoo Environmental Park and Zoological Society of London, the Common Dormouse Captive Breeders Group and this year the Warwickshire Wildlife Trust, as the 2018 reintroduction is taking place at one of their reserves. Paignton Zoo Environmental Park is a registered charity. For more information go towww.paigntonzoo.org.uk or ring 0844 474 2222.