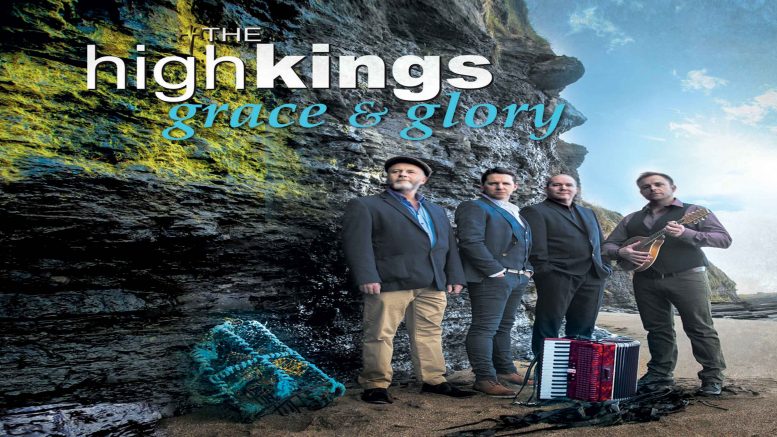 Having just completed playing on every stage at the Isle of Wight and Glastonbury Festival plus a US tour which is almost sold out. What’s On South West Magazines artist of the year ‘The High Kings’ have a brand new album out called ‘Grace & Glory’

Almost ten years ago, four Irish singers, performers and songwriters decided to take a calculated risk. The constituent parts of The High Kings – Finbarr Clancy, Brian Dunphy, Martin Furey and Darren Holden – each had a wealth of history in the music business behind them, but knew that in order to maintain any level of creative interest they would have to boldly go where no other Irish ballad group had gone before.

In truth, back in the mid-late Noughties, Ireland needed a group like The High Kings. The heyday of ballad groups such as The Clancy Brothers and The Dubliners was a distant memory for generations of music fans, and to have another bunch of Irish lads taking up the baton and continuing the tradition was great news to thousands of fans worldwide.

“We could sing well, play our instruments well and harmonise well,” says Darren Holden, humbly underselling somewhat the numerous skill sets of the individual members. “People were looking for guys with character, presence – not just cardboard cut-outs – so the respective experience we all had wasn’t just helpful but essential.

The four members immediately knew that something special was taking place (“we knew within the space of a few songs that there was magic”), and within months had clicked as a creative unit as well as friends. The self-titled debut album, released in 2008, reached a highly impressive number two on Billboard Magazine’s World Music chart. It was during The High Kings second tour of the US in 2011, however – having graduated from playing small venues to larger halls as they promoted their follow-up album, Memory Lane, which also crashed into Billboard’s World Music chart – that everyone involved realised the fanbase was growing into something that no one had predicted.

Subsequently, the group’s tour of Ireland sold out within hours. “We didn’t expect that,” admits Darren, “and then about three gigs into that tour we realised we had touched not only a nerve but also a memory. People loved what we were doing, and they would tell us after the shows that what we did and how we were doing it meant so much to them – they had waited years for a group like us.”

As if that wasn’t good enough, The High Kings received the stamp of approval from the likes of Christy Moore and, perhaps more pertinently, Ronnie Drew, the lead singer of The Dubliners, and the man behind one of Ireland’s most recognisable and enduring ballad voices. The High Kings had achieved what many had thought improbable, if not impossible: they were moving the Irish ballad tradition into the here and now, carrying along with them the steadfast older fans while simultaneously bringing it to a new audience. “The gigs were getting bigger and bigger, and we felt we were breaking down barriers.”

More was to come in 2013 with the group’s third studio album, Friends For Life, which featured original songs among the traditional fare. Such an undertaking had always been discussed, reveals Darren.

“On Memory Lane, we stuck to the tried and tested formula, and that was a really good plan, because the album sold very well. But with Friends For Life, which was originally planned as another covers record, we worked with Sharon Shannon, who co-produced, and that changed things significantly for us. She initially heard one of our songs – Oh Maggie, which I wrote – and she really thought it should be included. And then several more songs written by group members followed.”

According to Darren, The High Kings stepped out of the shadows by taking the original song writing route. “We were delighted! We felt the songs were really good, and we sensed it was the next step. We finally sensed we were about to embark on a new chapter for The High Kings, rather than repeat the approach we took on the first two albums.”

Stepping out of the shadows inevitably threw light onto their own songwriting talents. Credibility, too? “Absolutely. With versions of well known or previously written songs, you can get four people talented enough who are very handy singing them, but with original songs you mark your own territory, you stand out. And we were lucky, thankfully – we had a couple of original songs that were hits in various parts of the world.

The development of original songwriting – ballad-style but with contemporary touches – from each member of The High Kings continues apace, but balance must be maintained. To a degree, expectations have to be met while still moving specific creative elements forward, which is why the group’s fourth studio album, Grace & Glory, takes them back to the essentials that kick-started their career in the first place.

“We felt it was the right time to park the original songs for a while,” says Martin. “We did a two-year tour for the Friends for Life album, and then we put out a live show album/DVD – Four Friends Live. That was received so well that we felt a back-to-basics approach – traditional ballad songs with new arrangements – would be good.”

To say that The High Kings are charting a new course for Irish ballad music – equal parts rousing and reflective, energetic and insightful – is an understatement. They are, essentially, marking out a new and bright era for Irish folk music, and aiming to bring a broad demographic along for the journey.

“With Grace & Glory we’re going to achieve that,” affirms Martin. “There is something for everybody on the album, and any doubters out there might just discover there’s a whole lot more to us than perceptions would have them believe. Previous High Kings albums have been stepping-stones, but this one sees us on top of things.”

Time to move on, then? “Full steam ahead!”

You can catch The High Kings at the following UK venues

Grace & Glory is now out on Celtic Collections, and is available to buy
from all good record stores, as well from www.thehighkings.com and iTunes