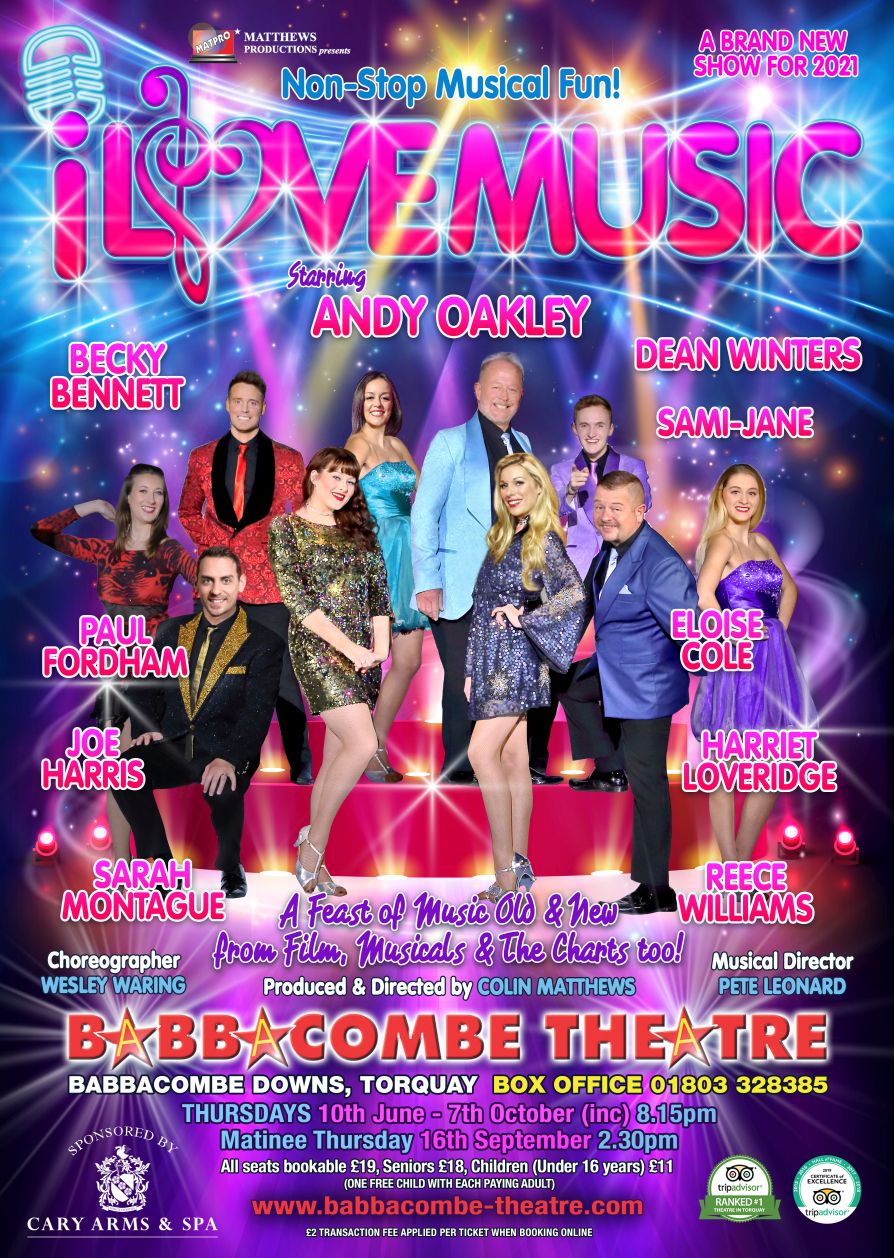 After becoming apparent that LIVE THEATRE is something people are enjoying again after 15 months of restrictions, the Babbacombe Theatre in Torquay having had an overwhelming response with the 5 Star production SuperStars 2021 since it began its run mid-May, are delighted, that from Thursday June 10th the venue will be able to boast, two strong productions running midweek throughout the year!

It is said that a good song stands the test of time, and that can be said about the 40 musical numbers featured in the new show, I Love Music. You can expect to enjoy a fun-filled production that will take you on an inspirational musical journey, encapsulating all genres on the musical spectrum spanning five decades.

You can expect to enjoy pop classics from Michael Buble, Rick Astley, Roy Orbison, Little Mix, The Osmonds, Abba, Shirley Bassey, Christine Aguilera and Dua Lipa; Motown Classics from The Temptations, The Shirelles & The Ronettes interspersed with some of the most favoured and popular songs from movie soundtracks which include, Monty Python’s Life of Brian, Evita, You Only Live Twice, Prince of Egypt and Burlesque. Prepare to be starstruck too, with numbers from award winning musicals Matilda, Ghost and Hairspray, all performed by a cast of ten extremely talented vocalists, that know how to not only deliver a song but perform it with finesse.

“One good thing about Music, when it hits you – you feel no pain” Whilst this is a quote by Bob Marley, and relative to music specifically, it can also be said about the shows, host and compere, who can pack an almighty punch too: Andy Oakley.

Andy usually connects with the crowds by making them laugh, he is a versatile comedian, who can deliver a song as well as a joke. For some years he has been a firm favourite with Babbacombe audiences, whilst you will get a hint of his humour during, I Love Music, it will be his vocal prowess, that impresses.

A great song should lift your heart, warm the soul and make you feel good, imagine your euphoria after enjoying an evening with so many wonderful melodic memories all seamlessly merged together, by the show’s Producer & Director Colin Matthews, Musical Director Pete Leonard & Choreographer Wesley Waring.

The show will run weekly EVERY Thursday from the 10th of June to and including 7th October at 8.15pm with a Matinee performance on Thursday 16th September at 2.30pm. It’s worth noting that visitors to this show will also in receipt of a discount voucher to see the variety show, bursting with comedy, song and dance which runs weekly on a Tuesday & Wednesday.

Tickets for both shows are available directly from the venue’s Box Office on 01803 328385 or via the venue’s website, www.babbacombe-theatre.com