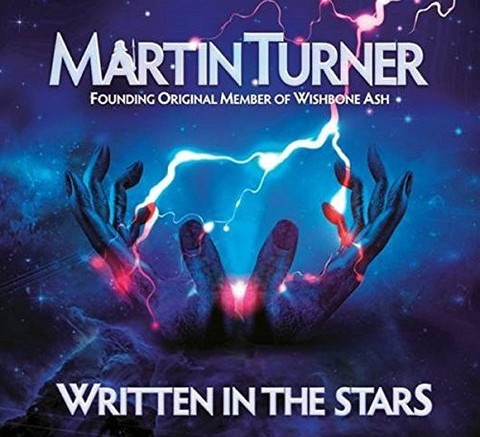 Album of the Year

Turner describes this new album as “a guitar- based set of songs which represents an extension of the Wishbone Ash legacy, with an emphasis on the melodic qualities that the classic line-ups of the band were known for.”

I was looking forward to receiving a copy of this album as it’s not every day you get the chance to review work from such an iconic artist as Martin laced with a rich musical history going back over four decades.  ‘Written in the Stars’ has an astronomy theme which is carried throughout the whole album.  You could almost say a concept album – which is a rarity these days.  The album features a crescendo of musical styles and emotions whilst still having an authentic progressive feel which Martin has become known for from day dot.  Expect to find the signature guitar harmonies and the real infusion of musical styles such as blues and folk with a new age feel.  Track by track review.

THE BIG BANG (OVERTURE) Instrumental
A shooting star of a song – a haunting melody full of powerful emotions and dynamics which leads onto the beauty of chaos, with windy guitars and Martin’s unmistakable base line.

THE BEAUTY OF CHAOS  Instrumental
This song jumps into the blue almost like going from black and white to colour, minor to major, with shooting stars flying all over the mix.  The guitars sit really well with a great acoustic undercoat.  If you play this track loud enough I am sure you would actually take off.

WRITTEN IN THE STARS
The title track ‘Written in the Stars’ is without question one of my favourite songs on the album. Straight into Wishbone’s signature twin guitar harmonies and the vocal on this track is probably the most sympathetic to the true core of the Wishbone sound. The harmonics and down strokes of the guitar with heavy harmonised vocal works beautifully – a cosmic work of art!

LOVERS
Lovers has a very melancholy feel yet again an acoustic driven tune.  A song that keeps the kindred spirit of a loved one lost.  We are a love song without an ending.  To me it has a very American feel to it still a great song!

VAPOUR TRAIL
Yet another song which starts with a very Latin American feel to it.  Almost about to burst into Flamenco with beautiful harmonies and excellent guitar work with an acoustic foundation.

THE LONELY STAR Instrumental
This is the intergalactic Parisian walkways with guitar harmonies piercing all over this song with a smooth jaded feel.  An instrumental which I find takes you on a real journey. Sometimes in music it’s what you don’t play that makes the killer difference.

FOR MY LADY
A beautiful song – the space from the guitars has that Walking on the Moon vibe.

PRETTY LITTLE GIRLS
One of the edgiest songs on the album which was born to be played loud.  Another song that to me has an American feel – kind of Jimmy Ray Vaughan vibe.  The chorus crashing through the verse in true progressive style.

FALLING SANDS
A tidy little tune confirming Martin’s ability to take a ride or trip within a song, a dream within a dream – possibly the most easy listening track on the album.

MYSTIFY ME
One of my favourites on the album featuring great guitar work from Danny and Misha.  If you could bottle that sound you could create your own Wishbone condiment that you could sprinkle over everything musically.  Mystify Me, Pacify Me, Take me to your King, Let me see the darker side of you.

INTERSTELLAR ROCKSTAR
Without question one of the most beautiful songs on the album.  Originally written and composed by Mark Emery and Ivan Jewel.  The perfect song to end the album.  As with The Big Bang – these two songs book end the album perfectly.  Interstellar is a very haunting almost spiritual song.  Melodies of beauty ring out is true to the word.  A great guitar solo to end this album.
Mark also produced the album with Martin and I can’t really fault any of it.  The track selection couldn’t be better.  The theme and dynamics are noticeable from the start – you can just feel how much work has gone into this collection of songs.  All this album would need is David Bowie’s “Space Oddity” and I don’t think you could find a better collection of songs to have that intergalactic feel.  I hope everyone who worked on this project is absolutely over the moon with the results (no pun intended).  I dearly look forward to hearing these songs played live – congratulations to all concerned.

Written in the Stars is available from the following outlets –
Amazon, itunes and Martins official website www.martinturnermusic.com