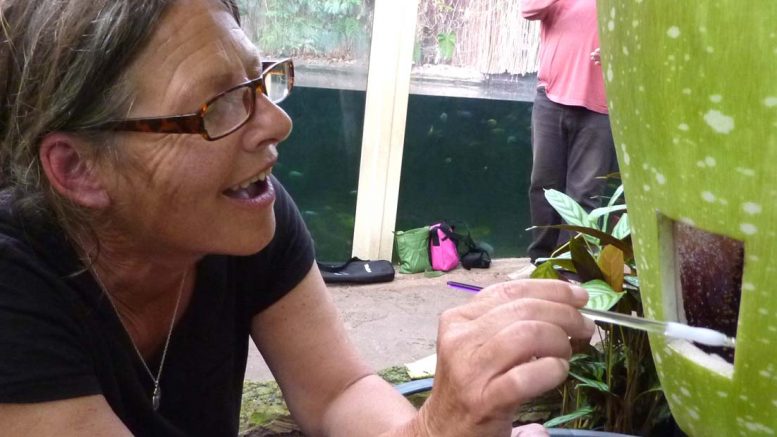 Paignton Zoo Environmental Park has sent rare pollen to Scotland in a 500-mile mercy dash. The Devon zoo dispatched the fresh pollen – essentially, the male sperm of a plant – to the Royal Botanic Garden Edinburgh. The fine golden dust was from a Titan arum, arguably the largest, strangest and – when in bloom – the smelliest plant on Earth.

Titan arum (Amorphophallus titanum) flowers can be up to 3 metres high and 3 metres in circumference and smell like rotting meat. The pollen is rare because these unearthly plants only bloom once every few years.

It was essential to keep the pollen cool in transit, so it was packed in a special polystyrene box with cold blocks and silica balls to keep moisture levels down. The pollen was destined for Royal Botanic Garden Edinburgh’s very own Titan, Reekie. Sadly, it arrived too late, as Reekie bloomed early and even caught the experts by surprise.

However, it’s likely that the pollen from Olympia and Tiny Tim will be kept in special storage facilities at -80 degrees, which means it could last for years. In 2012, Paignton Zoo was the first zoological collection in the UK to have a Titan arum bloom. The gardens team succeeded again in 2015 – but 2017 has been their best year ever for these smelly giants, with two Titans blooming.

Paignton Zoo gardeners pollinated the first of their two Titans – Tiny Tim – with pollen donated by Cambridge University Botanic Garden. They didn’t try to pollinate Olympia, the Zoo’s second giant bloom of 2017, but collected pollen by cutting through the side of the plant – which is several centimetres thick at the base – and collecting the tiny yellow grains.

Paignton Zoo Head Gardener Catherine Mortimer said: “The whole exercise has been great for fostering links with other botanical organisations and gaining recognition from them of our horticultural efforts.” Olympia was so called because she last flowered in 2012, during the London Olympics. She grew to well over 2 metres in height. The last time staff weighed it, the tuber was 56 kilos –roughly the weight of a teenager…

Catherine added: “It is great for us to be able to talk about horticulture at Paignton Zoo. We are a combined zoological and botanical garden, the plants are as important as the animals. This has been a really good opportunity to remind people of that. Paignton Zoo is rubbing shoulders with the Royal Botanic Garden Edinburgh, Cambridge University Botanic Garden, Royal Botanic Gardens, Kew and the Eden Project. The whole gardens team has worked hard on this and should be very proud of the results.”

The plant – from the rainforests of Sumatra and a member of the Arum family – is classed as Vulnerable on the IUCN Red List of Threatened Plants. It has one of the largest flowers in the world; the bloom – correctly, an inflorescence – is green on the outside and bright red inside, with ribbed sides and a frilled edge. Due to its odour – said to be like rotting meat – it’s known as a carrion flower, and has been dubbed corpse flower or corpse plant. It emits the strong smell at night to attract pollinators.