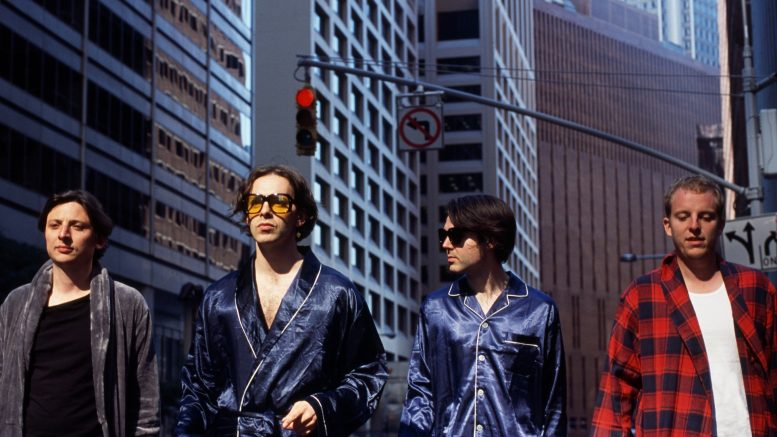 SHARE NEW SINGLE ‘YOU DON’T WALK AWAY FROM LOVE’

A new chapter in the story of Peace is hotting up. After sharing the new tracks ‘From Under Liquid Glass’ and ‘Power’ the Midlands quartet subsequently announce details of their new single taken eagerly anticipated third album ‘Kindness Is The New Rock And Roll’, which will be released on May 4th on Ignition Records.

‘Power’ was supported at Radio 1 by Annie Mac and Huw Stephens and highlighted as Record of the Week and subsequently added to the daytime playlists at both Radio X and Virgin, as well as receiving an Absolute Radio playlist add.

Along the way they’ve been heralded by a number of high profile admirers. Frances Bean Cobain hailed ‘From Under Liquid Glass’ as her favourite song of the past ten years, while fans such as Wolf Alice, Foals, Matt Healy of The 1975 and The Vaccines demonstrates that Peace are both respected by their peers and are an important influence upon a new wave of bands.

Now Peace share a brand new single from the forthcoming album in the shape of ‘You Don’t Walk Away From Love’. The track was produced by Simone Felice (Bat For Lashes, The Lumineers) and recorded at his studio in the Catskills Mountains, Woodstock.

Opening with a stop-start riff that’s inventive in its simplicity, ‘You Don’t Walk Away From Love’ glows with the buoyant optimism that’s suggested by the album title. The uplifting hook is built for the summer months ahead, and the middle-eight really enhances the track’s immense feelgood factor.

“This song is about the colours of the heart that live under the cool pastels and monochrome chequers,” says frontman Harry Koisser. “It’s about the bright primary stubbornness and unsophisticated optimism that won’t stop squirming toward true love. It’s a 100% real life true human emotional time capsule being unearthed for me. It was something I was desperate to say to somebody but obviously didn’t have the courage.”

‘You Don’t Walk Away From Love’ adds another layer of anticipation of what to expect from the album. ‘Kindness Is The New Rock And Roll’ is available to pre-order from https://peace.lnk.to/Shop with ‘From Under Glass’, ‘Power’ and ‘You Don’t Walk Away From Love’ all provided as instant downloads. The album is available on digital, vinyl, CD & limited-edition cassette formats, with various bundles also on offer.

Peace embark upon a UK headline tour in May in support of the album. In addition, they’ve also confirmed a number of key festivals, a Jack Daniel’s Presents… homecoming show to benefit the Music Venue Trust, and a show as special guests to The Courteneers: