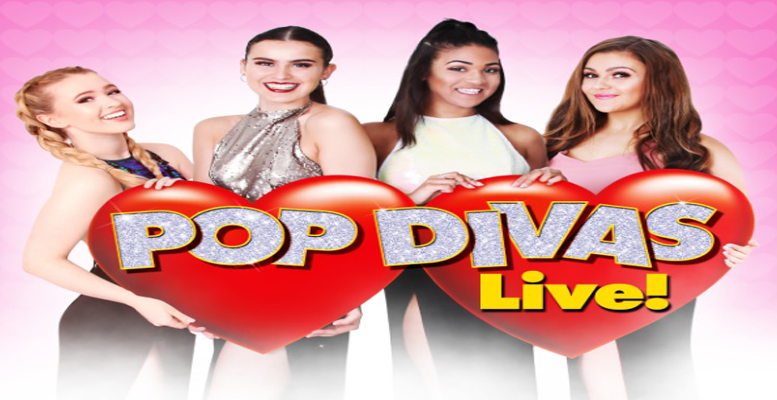 THE FAMILY FOCUSED POP PARTY OF THE YEAR COMES TO TORQUAY!

The highly acclaimed touring production Pop Divas Live! is coming to the Babbacombe Theatre on Friday 12th April at 6pm.

Pop Divas Live! takes the audience on a whirlwind tour of their favourite pop acts creating the perfect concert experience for little divas and their parents.

Little Mix will cast some Black Magic and Taylor Swift will Shake It Off as four enormously talented girls bring you up close and personal with the greatest female pop performers of today including Meghan Trainor, Ariana Grande, Beyoncé and Rihanna.

With a dazzling array of superb vocals, choreography and state of the art videos the show is a perfect night out for both little divas and big divas alike.

This new concept for a tribute show, was launched in 2017 by Creative Director, Katie Barker-Dale. Katie trained at Laine Theatre Arts and has been in the industry for 10 years as a professional dancer and choreographer working in theatre, TV and film. She has travelled the world working for brands such as Topshop and Benefit Cosmetics as well as appearing in films such as ‘Legend’ and TV commercials for brands such as Samsung and Honda.

The young cast are highly experienced across all genres of entertainment from stage to screen. Kali Dronsfield (Meghan Trainor and Ariana Grande in the show) appeared in Cameron Mackintosh’s West End production of Oliver! Lauren Russell (Beyoncé, Rhianna and Leigh Anne from Little Mix) has appeared in the hit TV shows, ‘Silent Witness’, ‘Hotel Babylon’ and ‘Family Affairs’. Boo Miller (Katy Perry and Jade from Little Mix), was last seen in a featured role in the Christmas 2017 TK Maxx Commercial. The show has proven to be popular for all ages up and down the country but especially for young children and their parents. Creative Director Katie said, “It’s been amazing to see my vision come to life with the help of a fantastic team. I’ve always wanted to create a show like this, and the best part of the whole experience has been seeing the kids and their parents having fun, singing and dancing along together.”

Tickets for Pop Divas Live! on the 12th April  are available from the Babbacombe Theatre’s Box Office on 01803 328385 or online at: www.babbacombe-theatre.com

Lauren Russell (Rihanna, Beyonce, Nicki Minaj, Leigh-Anne from Little Mix)
Lauren’s onstage roles include Rosalia in ‘Westside Story’ and Star To Be in ‘Annie’ (Rhodes) She has played various ensemble roles and most recently appeared as a chorus dancer in the pantomime, ‘Cinderella’ (Rhodes Arts Complex). Her TV appearances include ‘Silent Witness’, ‘Hotel Babylon’, ‘Notes on a Scandal’ and ‘Family Affairs.’ She was also a contestant in the 2015 series of X Factor. Lauren has choreographed productions such as ‘Sound of Music’ and ‘Guys and Dolls’ and regularly works in colleges and schools, teaching dance to students. Kali Dronsfield (Meghan Trainor, Ariana Grande, Jessie from Little Mix)
Kali began performing professionally at a young age when she appeared in ‘Oliver’ in the West End. Her training at Sylvia Young Theatre School led to her playing various roles in productions such as ‘West Side Story’, ‘Annie’ and ‘Oliver’ (Rhodes Arts Complex). Her pantomime credits include ensemble roles in ‘Robin’ Hood’, ‘Cinderella’, Jack and the Beanstalk’ and ‘Dick Whittington’ in which she also worked as dance captain (Rhodes Arts Complex). Her acting credits include playing Tinkerbell in ‘Peter Pan’ (Harlow Playhouse) Peter in “Peter Pan’ (Rhodes Arts Complex) and Hermia in ‘A Midsummer Night’s Dream’ (Rhodes Arts Complex). Kali completed a season for Bourne Leisure at a Haven Holiday Park as a dancer and regularly teaches dance classes for KBD Dance in Bishop’s Stortford. Georgia Tyler-Collins (Taylor Swift, Perrie from Little Mix)
Georgia has been performing since a young age and started out at Pineapple Performing Arts. She has played various roles on stage including Tiger Lily in ‘Peter Pan’ (Harlow Playhouse) and Graziella in ‘West Side Story’ (Rhodes Arts Complex), as well as various ensemble roles. She has played the female lead in several pantomimes including Jill in ‘Jack and the Beanstalk’, Alice Fitzwarren in ‘Dick Whittington’ and most recently, Cinderella in ‘Cinderella’ (Rhodes Arts Complex). Her other panto credits include ensemble in ‘Cinderella’, and ‘Robin Hood’ (Harlow Playhouse). Georgia has worked as part of the entertainment team at Paradise Wildlife Park and also regularly teaches drama and dance to primary aged children for Phoenix Theatre School and KBD Dance in Harlow & Bishop’s Stortford. Boo Miller (Katy Perry, Jade from Little Mix)
Katie has appeared in many plays, musicals and pantomimes and more recently played the role of Jack in the hit pantomime ‘Jack and the Beanstalk’ (Rhodes Arts Complex). She has played various ensemble roles in musicals such as ‘Annie’, ‘Westside Story’ and ‘Peter Pan’ (Rhodes Arts Complex). Her acting credits include Helena in ‘A Midsummer Night’s Dream’ (Rhodes Arts Complex) and Adriana in ‘The Comedy of Errors’. Katie has performed at the Edinburgh Fringe Festival twice with the innovative physical theatre company ‘Temper Theatre’. She has performed as a backing dancer for successful function band ‘Salut’ and she regularly teaches and assists on dance classes for KBD Dance in Bishop’s Stortford.