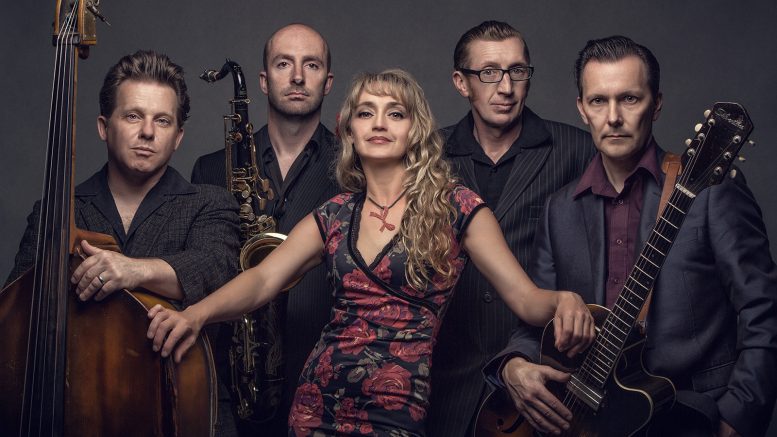 If you’ve seen The Primitive Noise Band live and witnessed Becky Brine singing her heart out for all she’s worth, you’ll realise this isn’t just another “newcomer” band on the scene. This is a scorching collaboration between some of the UK’s firebrands of Blues, Rock ’n’ Roll, Rockabilly and Jazz. The band effortlessly takes the coolest fundamental elements of American roots music, to produce their very own perfectly blended original tunes with a raw vintage edge. They released their self-penned debut album ‘Ghosts’ in the spring of 2016, causing an underground tremor which continues to build and spread. On the opening title track Becky sings “I’m running baby, I’m running fast, I’ve got to outlaw all of these Ghosts from my past”. The lyrics are a fitting analogy for the five band members. Whilst they’ve collectively toured in over 30 countries, appeared at some of the most prestigious roots clubs and festivals in the World, recorded and played live with artists such as Jeff Beck, Robert Plant, Van Morrison, Jimmy Page, Ronnie Wood, Tom Jones and Eric Clapton, they’re still hungry to keep moving forward, creating something fresh and ultimately, still buzzing about the music they love. The Primitive Noise Band have been touring, spreading the word and winning fans since 2013 with their explosive live show. They serve up a no-nonsense rock ‘n’ roll baptism, aimed at converting non-believers with an “all-killer” set of tunes delivered with humour, grit and irresistible grooves. Becky has been described as “A white Devonshire Lass whose voice is black, soulful gold” (The Birmingham Metro). They learnt and mastered their trade the old way. As founder members of U.K. rhythm & blues legends The Big Town Playboys and The Nightporters they got out there and did it, touring relentlessly, over 200 shows a year, every year. One day playing a dive, lucky to get out alive, the next playing The Royal Albert Hall and everything in between, all this for the love of the music and the thrill of the show. Nothing has changed, and if you get a chance to catch The Primitive Noise Band when they’re in town, you’ll become a believer too.

You can catch The Primitive Noise Band locally on

For more information and to contact The Primitive Noise Band please visit www.primitivenoiseband.com