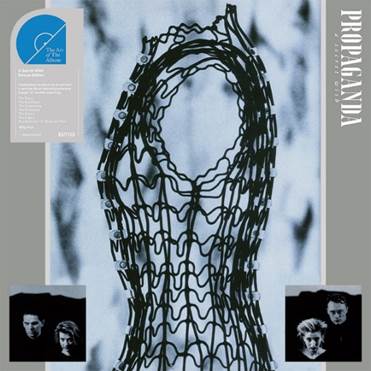 “I don’t know how you’d categorise ‘A Secret Wish’. It didn’t really sell that well, yet
tastemakers refer to it as, whatever it is, ‘a seminal record’” – Stephen Lipson

“How do you define success? It’s successful if people really cherish it” – Claudia Brücken

Both these new 180g vinyl LP & CD versions of ‘A Secret Wish’ replicate the original respective vinyl LP & later CD formats’ wholly different 1985 sequencing, remixed tracks and original songs and have been remastered from the original tapes (the scanned covers of these mastertapes feature in the booklets) at Trevor Horn’s SARM Studios in West London. The mastering process was undertaken by Joel Peters and overseen by ZTT Records archivist Ian Peel. The 180g vinyl LP package includes a 6-page booklet and 12”x12” artcard whilst the hardback CD mediabook format boasts a 32-page booklet, with both formats featuring Ian Peel’s newly-written and extensively-researched sleevenotes which tell the story of the players, the craft, the impact and the legacy of this much-loved album through interviews with band members Ralf Dörper & Claudia Brücken, plus producer Stephen Lipson.

Although much feted by critics and reaching a creditable No.16 in the UK Album Chart upon its original release on 1 July 1985, ‘A Secret Wish’ sold relatively poorly (inexplicably not even charting in the band’s native West Germany) although the album’s three singles (“Dr Mabuse”, “Duel” and “P-Machinery”) achieved greater chart success across Europe as well as scoring a No.1 hit in the US dance charts. The band’s biggest UK hit, “Duel”, did reach No.21 in the UK Singles Chart in April 1985 which led to the band making their sole appearance on the BBC’s long-running primetime music show ‘Top Of The Pops’ in June of that year.

Propaganda were formed in 1982 in Dusseldorf, West Germany by Ralf Dörper along with instrumentalist Andres Thein and vocalist Susanne Freytag. Alongside fellow Dusseldorf residents DAF, Dörper had been a pioneer of hard, punishing electronic beats through his work as a member of Die Krupps (their 1981 single “Wahre Arbeit, Wahrer Lohn” in particular proving a major influence on acts such as Nitzer Ebb and the wider Electronic Body Music movement) and had also by this point released a solo album, his reimagining of the soundtrack to David Lynch’s cult classic movie ‘Eraserhead’. Enlisting classically trained musician Michael Mertens and 18 year-old vocalist Claudia Brücken, the band were quickly signed to ZTT by the nascent record label’s marketing supremo Paul Morley and relocated to the UK, announcing their arrival with the release on 27 February 1984 of their Trevor Horn produced debut single “Dr Mabuse”, its gliding synths and Anton Corbijn directed video clip helping provide a surprise UK Top 30 hit single. Propaganda were invited to perform their debut hit on Channel 4’s ‘The Tube’, cheekily also taking the opportunity to bewilder casual Friday teatime viewers with their Susanne Freytag fronted German language take on Throbbing Gristle’s “Discipline” (actually the first track that the original three-piece Propaganda line-up had demoed, as “Disziplin,” in early 1983).

With ZTT Records maestro Trevor Horn now busy on manoeuvres with labelmates Frankie Goes To Hollywood, production duties on ‘A Secret Wish’ were entrusted to Stephen Lipson (with Horn credited with a ‘supervisory’ role in the process). A particularly fruitful working relationship had already been formed by Horn and Lipson over the past 18 months, starting with their work on Frankie Goes To Hollywood’s No.1 debut single “Relax” and, following the Propaganda album project, the duo went on to co-produce a series of classic albums for acts such as Pet Shop Boys, Simple Minds and Paul McCartney. Lipson would later go on to even greater acclaim via his early 90s production work with Annie Lennox.

Following the unveiling of hit second single “Duel” in April 1985 and the album’s eventual release on vinyl LP and cassette two months later (both much delayed due to ZTT’s time and resources apparently being swallowed by the worldwide success of labelmates Frankie Goes To Hollywood), Propaganda spent much of the next six months touring Europe and the USA, their onstage ranks swelled by guitarist Kevin Armstrong plus former Simple Minds’ Derek Forbes (bass) & Brian McGee (drums). The album was also finally released on CD on 30 September 1985, albeit in a completely rethought version, boasting a revised sequencing, a couple of newly remixed tracks and even complete with additional songs (both new BMG Art Of The Album formats replicate their respective original ZTT Records’ 1985 formats).

Today rightly considered something of a cult classic, ‘A Secret Wish’ boasts some of the most expansive and sophisticated electronic pop music ever committed to tape. This was majestic pop music made by and for adults (the album’s inner sleeve even included texts from Bathes, Moretti & Benjamin), packed with moments of great light and shade and with an inbuilt set of impeccable reference points – from Edgar Allen Poe and William Shakespeare to Expressionist filmmaker Fritz Lang via The Velvet Underground and Postcard Records’ indie heroes Josef K, whose “Sorry For Laughing” is covered on the album, reportedly at former NME scribe Paul Morley’s insistence. Reviews at the time were effusive with UK critics at the inkies and glossy pop titles equally fulsome in their praise – NME describing Propaganda in their album review as, “The children of Fritz Lang and Giorgio Moroder… The duel in ZTT’s crown,” whilst Melody Maker went even further; “Propaganda as the perfect post-punk pop group? Very, very easily.”

Now, Propaganda’s much-loved landmark debut album is celebrated here in BMG’s new ‘Art of The Album’ series, featuring new sleevenotes within both the CD & 180g vinyl LP formats recalling the story of the album’s conception and unique recording process. Comprehensively researched and written by Classic Pop magazine founder and ZTT Records archivist Ian Peel, these new sleevenotes cover in-depth the story of the album & the period in which it was written & recorded, the key players in its creation, the craft and instrumentation, the impact upon release & its legacy more than two decades later.

In the age of immediacy, accessibility, streaming and a la carte downloads the concept of an album or long player has become somewhat lost. The Art of The Album is a new series from BMG looking to refocus the attention on the album as a format. With a collection of seminal and classic albums, the Art of The Album series will celebrate releases that broke new ground in concept, production, song writing, and genre, leaving a lasting legacy as a complete body of work.

With extensive essays exploring the times in which the albums were conceived, the key players and personnel involved, the craft and creation of the music and artwork, the impact upon release and the legacy and cultural impact The Art of The Album series will celebrate the album as an art form.

CD – in Deluxe Mediabook with 32-page Booklet (cat no BMGAA05CD)