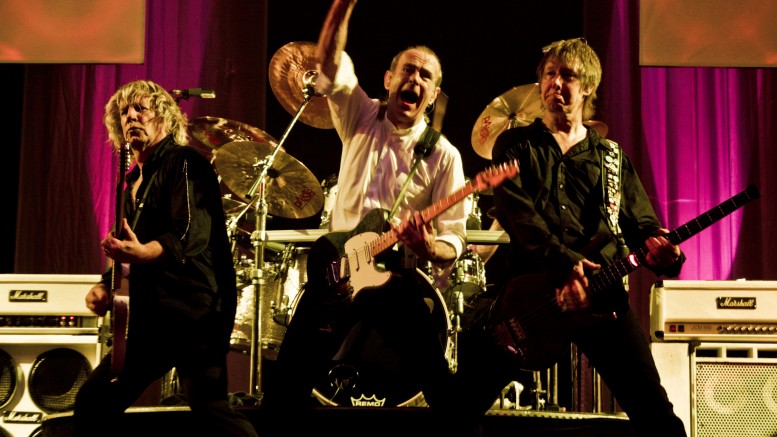 On the ‘Accept No Substitute: The Definitive Hits’ 3CD release, for the first time ever, all of the eras across six decades that make up the incredible career of this truly seminal British act are presented together.  Drawing a line through from the earliest days, right up until the present time, this is an in depth journey through time.  ‘Accept No Substitute’ is a treasure trove of hits, certainly, but also finds space for tracks that provide a narrative of the band’s story.  Featuring more than fifty tracks from twenty three of the band’s studio albums, as well as single versions of some key songs and live recordings, this collection offers all the hits and more.

‘Accept No Substitute: The Definitive Hits & More’ 2DVD offers a vast collection of the promotional videos for a swath of Quo classics, plus some extra special moments from throughout the years – and also some previously unseen material.  This is a visual archive that really shows the band at their best. With material drawn from numerous sources, and of course eras, this DVD release is something special. For Quo fans it’s unmissable.

Breaking into the big time in 1968, Francis Rossi, Rick Parfitt, Alan Lancaster and John Coghlan ground out the miles on their relentless tours, bringing their sound and their songs to an ever-growing army of fans.  Quo’s path was never easy, with personnel changes leaving just Rossi and Parfitt at the core of the group. A triumphant set at Live Aid in 1985 steadied the ship and the band have gone on, from strength to strength. Album followed album, tour followed tour. The band, now consisting of Francis Rossi, Rick Parfitt, Andy Bown (since ’76), John ‘Rhino’ Edwards (1986) and Leon Cave (2013) continue to bring their music to the fans.

‘Pictures of Matchstick Men’ is the song that bookends the CD tracklisting and truly charts the band’s trajectory.  Opening with the early psychedelic flourish that first made their name, and finishing with the ‘Aquostic’ version, it’s been quite a ride.  That early sound quickly became the trademark no nonsense driving rock of the Seventies as the band created a series of stone cold classic rock albums.  ‘Piledriver’ [72] was the record that blasted them into the upper reaches of the album charts and set the scene for a truly purple patch; the band’s next 12 albums would each crack the Top 10.  As the decades rolled by, Quo went on delivering hit after hit right up until the present day.  When in March 2013 the ‘Frantic Four’ line-up of Rossi, Parfitt, Lancaster and Coghlan reformed, grown men cried with joy, and live tracks are included here. The tracklisting finishes with material from the last studio album ‘Aquostic (Stripped Bare)’ in 2014.  Here, the band showed not only a mellower side but also the sheer musicianship and melody within their work, underlining the fact that these songs have stood the test of time.