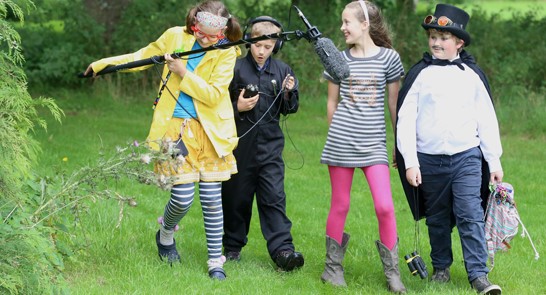 For the fifth year running, Exeter Phoenix and Four Of Swords present the hugely successful Summer Film School. The week-long course runs from 13th-18th August and offers kids aged 10-14 the opportunity to work with highly-skilled filmmakers to create a professional short film of their own.

From writing and storyboarding the ideas, to creating the set and costume designs, acting, operating the cameras, editing, and special effects, the week is a real crash course for the budding filmmaker in the family.

Set in the mysterious and magical grounds of Poltimore House, this year’s film will be a sci-fi interpretation of The Canterbury Tales. The final film will premiere at Exeter Phoenix in September where family and friends will be able to enjoy the finished film.

A parent of a previous attendee said ‘It’s no mean feat keeping a 13-year-old completely absorbed, engaged and creativity challenged for a week and we are indebted to everyone involved … it’s been great for his confidence and shown him endless creative possibilities.’

Places are limited for this creative summer holiday activity, so early booking is advised to avoid disappointment. Places cost £220 and are available to book from Exeter Phoenix’s website (http://www.exeterphoenix.org.uk/events/summer-film-school/) or by calling the box office on 01392 667080.