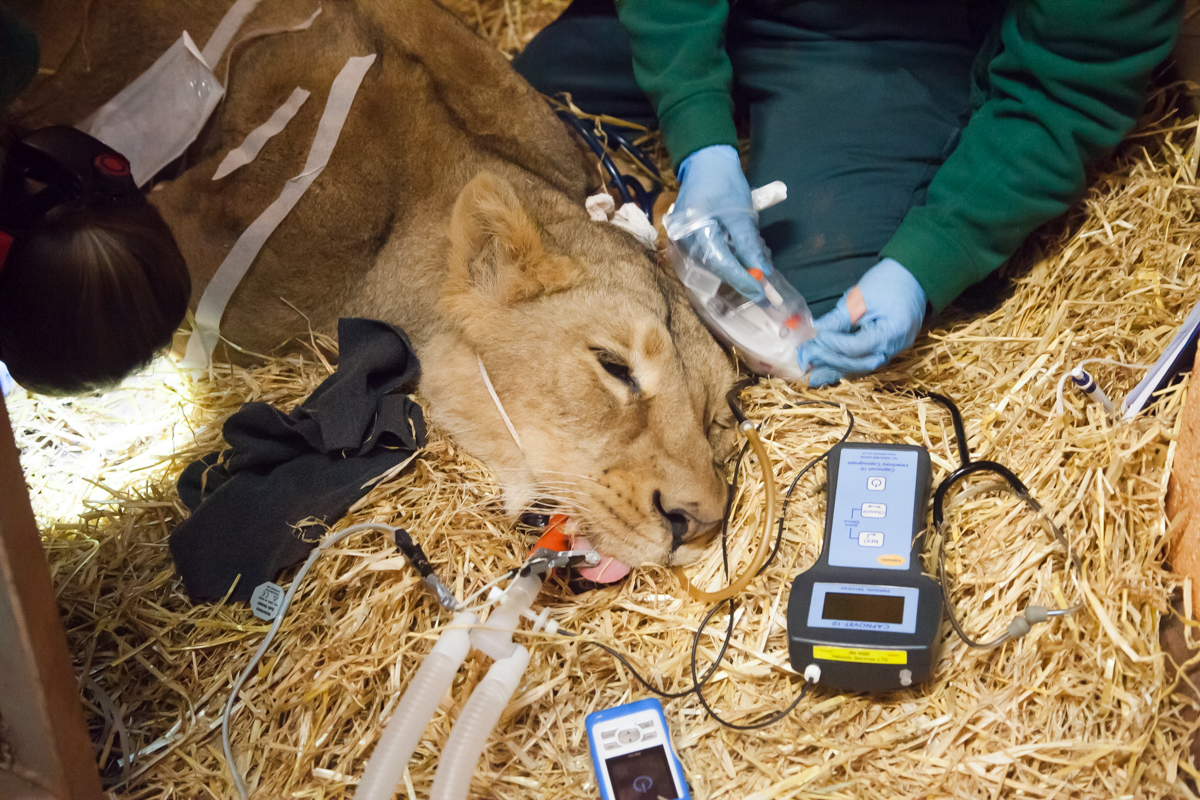 Staff at Paignton Zoo are having to take steps to control breeding in some animals. Among those to receive a contraceptive implant is five-year-old Asiatic lioness Maliya.

It’s all because of the single case of TB discovered at the Zoo last year. One antelope died in May 2017 and ten more had to be culled in September. Executive Director Simon Tonge: “Even a single positive case of TB leads to movement restrictions on mammals. This prevents us from being able to move young mammals on to other collections. Hence the need to curtail breeding.

“There are lots of fit and healthy breeding animals here, representatives of rare and endangered species, many of which, like the Asiatic lions, are part of international efforts to conserve their species. In fact, Maliya and Lucifer are the second most important breeding pair in Europe. It’s frustrating, but we have to manage them responsibly until we can resolve the situation. We only have so much space.”

Maliya’s veterinary procedure involved a general anaesthetic, a quick operation to insert the contraceptive implant under her skin and a general health check. It was carried out by Paignton Zoo’s in-house vet team in the off-show lion den. Paignton Zoo’s pride of rare Asiatic lions consists of two cubs, male Yali and his sister Arya – born in June 2016 – along with mother Maliya and father Lucifer, who is 15. Maliya and her mother, 14-year-old Indu, who completes the group, were both born at Paignton Zoo.

Senior Head Keeper of Mammals Rob Rouse; “Even though the European Endangered species Programme for Asiatic lions is keen for these animals to continue breeding, we need to be responsible about managing the space we have so we don’t run out of room. We need to keep our animals to the highest standards at all times.”

Paignton Zoo spokesperson Phil Knowling: “The Zoo of course remains a great place to visit. This simply means that, behind the scenes, staff are working extra hard to manage this situation sensibly. Animals are sometimes given contraception anyway, if we don’t want them to have any more youngsters – Maliya’s mother Indu already has an implant, for example.”

Zoo staff have discussed animal contraception with international experts. EAZA, the European Association of Zoos and Aquaria, has a specialist team, the EAZA Group on Zoo Animal Contraception, a group formed to gather knowledge on the use of contraception in zoo animals across Europe. With regard to TB the Zoo is working closely with the Animal Plant and Health Agency, the government agency that runs alongside DEFRA.

Executive Director Simon Tonge again: “The knock-on effects of TB are as bad as the disease itself. We hope to get the TB restrictions lifted as quickly as possible. Like any farmer in a similar position, we must take direction from DEFRA.”

TB is a complicated disease which comes in many forms, is hard to detect and harder to confirm. The Zoo has a strict disease monitoring programme and preventative health system in place to minimize the risk of any infectious disease spreading through the collection. Paignton Zoo Environmental Park is a registered charity. For more information go to www.paigntonzoo.org.uk or ring 01803 697500.