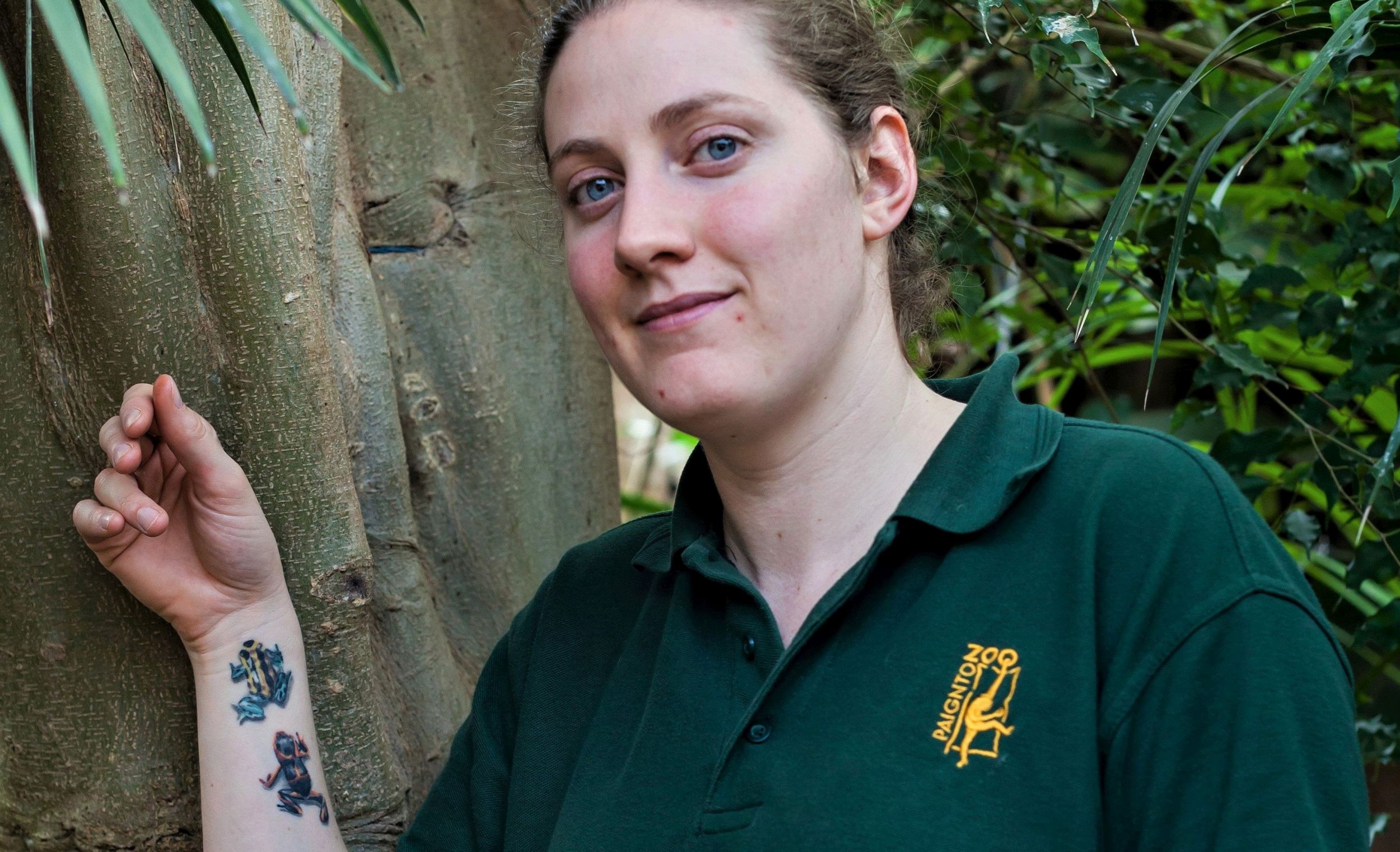 Zoo keepers are dedicated, passionate – even obsessed. They are devoted to the animals with which they work. For one keeper at Paignton Zoo Environmental Park in Devon, each conservation success means so much to her that she gets a permanent reminder.

Dr Katy Upton marks her team’s first successful breeding of each rare frog species with an anatomically correct frog tattoo. Katy explained: “I’m very proud of the work we do with these species and I love tattoos of the animals I work with. So far I’ve got two on my right forearm – Raniotmeya summersii – Summers’ poison frog – and Ranitomeya sirensis – the Sira poison frog.”

She got her first tattoo at 18, but these two frogs are recent additions. They were done by Claire Jackson at Artium INK in Exeter. They took an hour each, with the artist using photos to create a stencil. “They’re bigger than life-size because the frogs are so small. I’m very pleased with the results and will be going back for more.”

She hopes more conservation successes will bring more frog tattoos in the future: “I want to get Ranitomeya benedicta – the blessed poison frog – and Ranitomeya fantastica – the fantastic poison frog.”

Others on her wish-list include Atelopus – the harlequin toad – and a female Parsons chameleon. Katy has a menagerie of animal tattoos, including a small gecko, more frogs, two pink river dolphins, a baby tapir, a jaguar and a home-made tattoo on her wrist which was done in the Amazon.

“I got some after I finished my PhD. I got the two pink river dolphins whilst I was out in Canada at the World Herpetological Congress.”

Katy joined Paignton Zoo in January 2017, but her fascination for frogs is lifelong: “As a child I used to do the classic collecting tadpoles, frogs and reptiles and take them home – however, my mum has always been terrified of reptiles and amphibians and would refuse to let them in the house!

“Our Amphibian Ark is a fantastic facility. We have many exciting plans for the future and want Paignton Zoo to become one of the key players in amphibian conservation.

“Amphibians are threatened globally, with so many species at risk of extinction in the wild. Luckily, we are in a position to be able to do something about it. We can recreate the natural environments of different amphibians in miniature and simulate their natural weather conditions like sunlight, rainfall and humidity. It’s easier to do this for amphibians than for rhinos and tigers.

“I don’t feel that conservation is a career, it is more something you do throughout your life because you feel passionate about it. I love working in the Zoo world – having worked in other sectors, I have always found the zoo community to be a very enjoyable place to work, everyone clubs together to get things done. I believe that having a shared passion for conservation and the animals we work with helps.”

Paignton Zoo Environmental Park is a registered charity. For more information go to www.paigntonzoo.org.uk or ring 01803 697500.