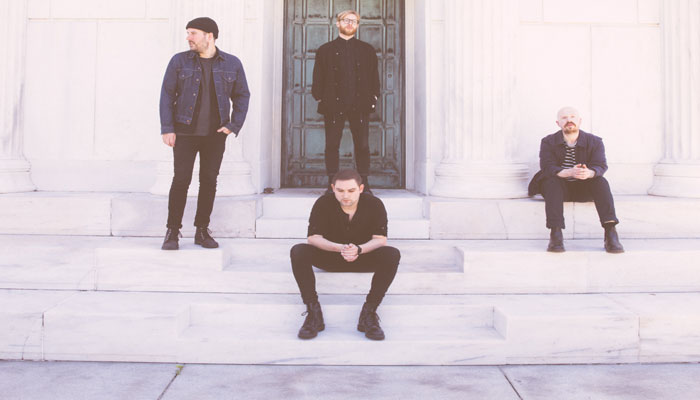 With their much anticipated fifth full-length album – and their first for new label Rock Action Records – IT WON/T BE LIKE THIS ALL THE TIME arriving next Friday (January 18th), Glasgow’s The Twilight Sad return today with the accompanying video for their current single: the driving, motorik ‘VTr’.

The clip – which was developed by a concept from the band’s Brendan Smith and directed by Michael Sherrington (from The Forest of Black) – perfectly captures the frenetic, cathartic energy of a Twilight Sad show, albeit one here portrayed through the distorted lens of memory. Shot on 16mm film with an onus on expressionistic lighting and practical visual effects, it vividly conjures the dark and atmospheric tone of the track itself.

Speaking of the video, Smith says, “We were keen to do something that felt like one of our gigs and to stay away from elaborate narratives or abstract concepts. Playing live is the exciting part for us and having a video that represents that was always the intention for ‘VTr.’ Working with Michael again was an easy decision, he really understands what we’re trying to do and has great ideas. We collaborated with him on the video for ‘I/m Not Here [missing face]’ and it’s important for us to have that consistency throughout.”

Sherrington continues, “When the band approached me wishing to create a performance-based promo for ‘Vtr’, I was enthralled (as were the band) with making sure that we didn’t just capture a documentation of them playing the track but create something that felt more thematically relevant to them. The aim being to make a piece that felt as visceral and arresting as the soundscape that the band crafts within this track all from the perspective of someone’s memory of one of their performances. I have always personally been interested in how we as humans perceive the world, the interplay between reality and our memory. How we experience events and the fragmentation of it when replayed through the prism of our consciousness.”

While the 11 tracks that comprise IWBLTATT largely began to take form during the band’s lengthy recent tours with The Cure, it wasn’t until returning to the UK and the isolation of his London home, that the band’s Andy MacFarlane distilled the group’s collective aspirations – to find immediacy in their writing, to bring a new hugeness to the often dark matter of their songs – into demos for their fifth LP. Following six months of pre-production, his vision was made flesh during a productive residency in a remote rehearsal space on Loch Fyne last November. Eager to keep momentum, the band subsequently tracked their efforts at Devon’s Middle Farm Studios with long serving live engineer Andy Bush a few weeks later.

Revisit recent single ‘Videograms’ here: youtu.be/TPMUYLF7S5c
For this record, frontman James Graham and MacFarlane officially brought long-time touring members Brendan Smith (The Blue Nile, The Unwinding Hours) and Johnny Docherty (Take a Worm For a Walk Week, RUNGS) in from the wings to help push The Twilight Sad to the next level. The results speak for themselves: an exhilarating listen, by turns cinematic and claustrophobic in its scope, the band dug deep to produce It Won’t Be Like This All the Time, and it’s perhaps their most raw and dynamic record to date.
“It’s a dark record but I think there are some uplifting moments to be had too,” Graham offers. “There are so many extremes here – there are moments that are harsh, then others that are quite melodic and others that are stripped right down. This album definitely comes with the extremes of every side of the band, I think. There’s a certain direct openness and candour now but at the same time I want to keep some mystery. We don’t like to throw things in people’s faces and spell it out for them.”

Pre-order IT WON/T BE LIKE THIS ALL THE TIME on CD or 12” Double Vinyl with exclusive tee, tote and signed print bundles at thetwilightsad.com or digitally here: smarturl.it/tsIwbltatt