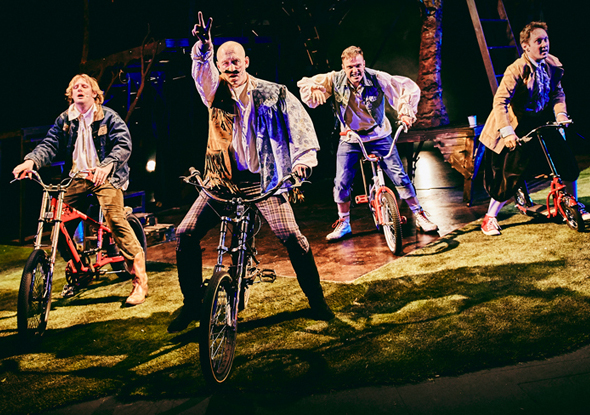 After their last show Dracula: The Bloody Truth was licensed worldwide with sell-out runs in the USA and Canada, the award-winning Le Navet Bete are back this Summer and Autumn with a comedy adventure that will be all for one and every man for himself.

This new co-production with the Exeter Northcott Theatre is the company’s fifth full-length indoor touring show and once again sees them team up with long time co-conspirator and legendary comedy writer and director, John Nicholson, who is co-artistic director of Peepolykus and has written extensively for BBC Radio 4.

The creative team have been joined by vastly experienced choreographer Lea Anderson MBE, founder of The Cholmondeleys dance company, and critically acclaimed theatre designer Ti Green, who brought the Peruvian Andes to the Bristol Old Vic for last year’s national tour of Touching the Void.

This brand-new show sees the company of four take on 40 characters, 50 different outfits and 112 costume changes as Alexandre Dumas’ 700-page classic is condensed in to two hours of mayhem and madness. Expect hilarious heroics, raucous romances and some bonkers fun with BMX bikes. Having opened at the Exeter Northcott Theatre at the beginning of May the show is touring throughout Autumn 2019 and Spring/Summer 2020.

‘The Three Musketeers is a really fun prospect for Le Navet Bete. It’s a widely known and well-loved story which is often played for laughs in amongst the drama. But in Le Navet Bete’s hands it hits the funny bone hard. With just four performers, it’s a distinctive offering.

“We’re especially excited to have worked with designer Ti Green and choreographer Lea Anderson – two people who are nationally recognised as being amongst the best in the business.’

‘Exeter Northcott Theatre is delighted to be working in partnership once again with one of the UK’s leading comedy theatre companies as they bring their unique approach to a touring production of The Three Musketeers, with no doubt hilarious and swashbuckling results.’

‘This is a Musketeers unlike any other. It has all the elements of an epic story that we have turned inside out and put our chaotic comic spin on to make the show bursts off the stage – literally!  We’ve got the best creative team we’ve had to date behind us on this so expect big laughs, unexpected characters and a night at the theatre you’ll never forget.’