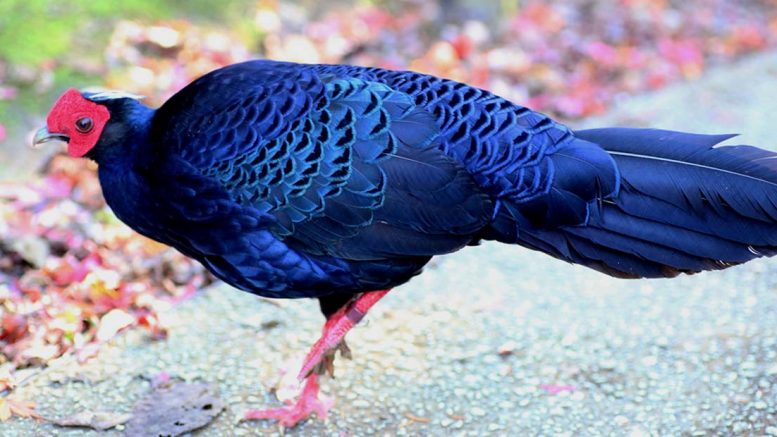 A Devon conservation charity is launching a project to help a bird that hasn’t been seen in the wild for nearly 20 years. Paignton Zoo Environmental Park aims to help save the Edwards’s pheasant, now listed as Critically Endangered and recorded as one of the world’s 100 most threatened species.

Paignton Zoo Curator of Birds Jo Gregson flew out to Vietnam in May to discuss plans that include reintroducing Edwards’s pheasant back into the forests of Vietnam.

This shy bird with dark, shimmering blue feathers has not been seen in the wild since the year 2000. The species has suffered from deforestation, hunting and the use of defoliants during the Vietnam War.

Jo: “There is a managed population of Edwards’s pheasants of about 1,000 individuals in zoological collections around the world. Paignton Zoo has two breeding pairs, one of which successfully raised five chicks this year. For the past two years, we’ve been studying their behaviour, trying to fill in the large gaps in our understanding of this species, which includes breeding behaviour. We have already noted some interesting behaviours, such as the way males stand and flap their wings before mating.”

Vietnam is one of the Trust’s six active regional conservation programmes, with the project building on the charity’s existing local links.

Jo Gregson: “The pheasant family has always been close to Paignton Zoo’s heart – our founder Mr Whitley had a big collection. We want to tell people the story of the Edward’s pheasant and about the peril the species faces, and help raise money for DNA studies. We are reactive to issues in the wild and, over time, our collection evolves to meet changing needs.

“There is the potential to set up a breeding facility in a well-protected forest reserve called Khe Nuoc Trong, which is very close to where the last known wild bird was seen in 2000. The eventual aim would be to release birds into the forest. The first steps are to build the facility, move pheasants from zoos around the world and make sure they are all adequately quarantined and health checked before pairing them up for breeding.”

Viet Nature, a local conservation charity, will run the project. The Zoo’s role will be to advise on the construction of the facility, develop veterinary and husbandry protocols and train local staff.

Dr Amy Plowman is Director of Conservation and Education for the Whitley Wildlife Conservation Trust, the charity that runs Paignton Zoo, Living Coasts in Torquay and Newquay Zoo in Cornwall: “We have a 12-year plan. Twelve years will coincide with the next Year of the Rooster. The aim is to have a sustainable, free-living population of Edwards’s pheasant by then.

“We’re ambitious – we want to build an education program, set up a breeding centre, establish partnerships in Vietnam to raise funds and awareness, form a partnering with a national park within the last known range of the species and train local aviculturists.

“In the meantime, we are continuing our research into their breeding behaviours and vocalizations and aim to compare the behaviours of parent-reared verses hand-reared chicks. The World Pheasant Association is doing DNA work to identify any hybrids to help form a new studbook to include only tested birds.” Paignton Zoo Environmental Park is a registered charity. For more information go to www.paigntonzoo.org.uk or ring 01803 697500.