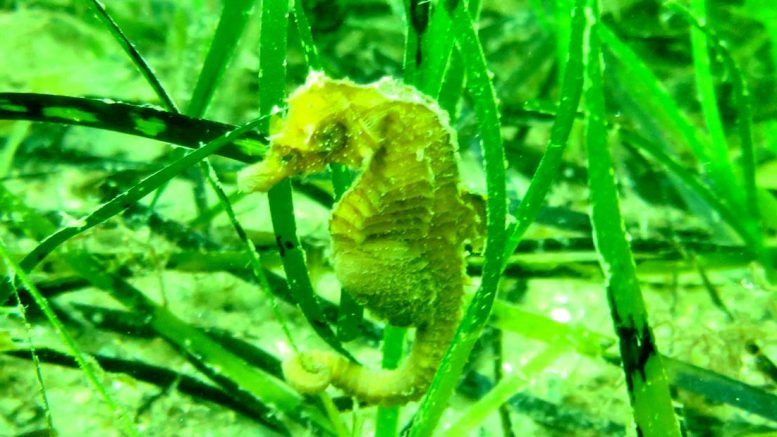 Two important discoveries made beneath the protected waters of Tor Bay have brought renewed calls for safe and responsible anchoring by boat owners. The first find was a pregnant seahorse; the second, close by, was damage to the seabed caused by the anchors of small boats. Both were inside the Torbay Marine Conservation Zone.

Experts at Living Coasts, Torquay’s coastal zoo, say that anchoring in the wrong place can damage vital habitat and threaten the seahorses. The seagrass areas in the Bay are voluntary no anchoring zones.

Designated in 2013, the Torbay Marine Conservation Zone is an inshore site running from Oddicombe Beach to Sharkham Point, protecting an area of approximately 20 square kilometres. Beginning at the shore, the boundary extends between 1 to 2.5km out to sea and includes Hope’s Nose and Berry Head.

This is the second seahorse to be found in the Torbay MCZ in two months. Both were found during seagrass surveys by volunteer divers from the Community Seagrass Initiative, a citizen science project aiming to raise awareness of seagrass habitats in the South West of England. Living Coasts is one of the project partners.

Seagrass evolved about 100 million years ago and can flower underwater; seagrass meadows are highly diverse and productive ecosystems. Some of the Bay’s seagrass seems healthy and full of life, but some is damaged and needs to be nurtured back to health.

Clare Rugg, the Curator of Living Coasts, said: “Many people use or have an interest in the waters of the Bay. There are inevitably different priorities. We need to work together to make sure everyone is happy. These seahorses are special and important and so are the seagrass beds. Biodiversity matters, even when you can’t see it.

“Anchoring in the wrong place damages the seagrass beds and threatens the seahorses. Our seagrass areas are voluntary no anchoring zones – they are marked with buoys. There are plenty of places where you can anchor safely. Boat users can also find out where the seagrass beds are in Torbay by using the Torbay app.”

What’s so special about this curious creature? In French it’s the Cheval de Mer, in Spanish, Caballo Marino. The English is rather more prosaic – short-snouted seahorse – although the Latin translates as “horse caterpillar”. But this delicate and beautiful creature is right under our noses. The species – the scientific name is Hippocampus hippocampus – is classed as Data Deficient, which means there is inadequate information to make an assessment of its risk of extinction.

As it’s seen in shallow coastal waters from the North Sea, around the European coast, into the Mediterranean Sea and down the Atlantic African coast, you might wonder why it needs protecting at all. But population density is patchy and at most locations they are rare. The limited information available suggests that populations are declining.

A major threat is habitat damage and human disturbance from coastal developments and the effect of fishing gear and anchors. Hippocampus hippocampus and the seagrass species Zostera marina are protected by the UK Wildlife and Countryside Act of 2008 and the seahorse is a UK Biodiversity Action Plan priority species.

Clare: “We need to do more research on this species. It is excellent news that we have it here, but we need to know how to keep it, protect it and nurture it. We need to do that while making sure boat users, businesses and holidaymakers can still get what they need from the Bay.” For more information go to www.livingcoasts.org.uk or ring 01803 202470.